IT Career Paths at Elantis – Employee Spotlight with Lance Taylor 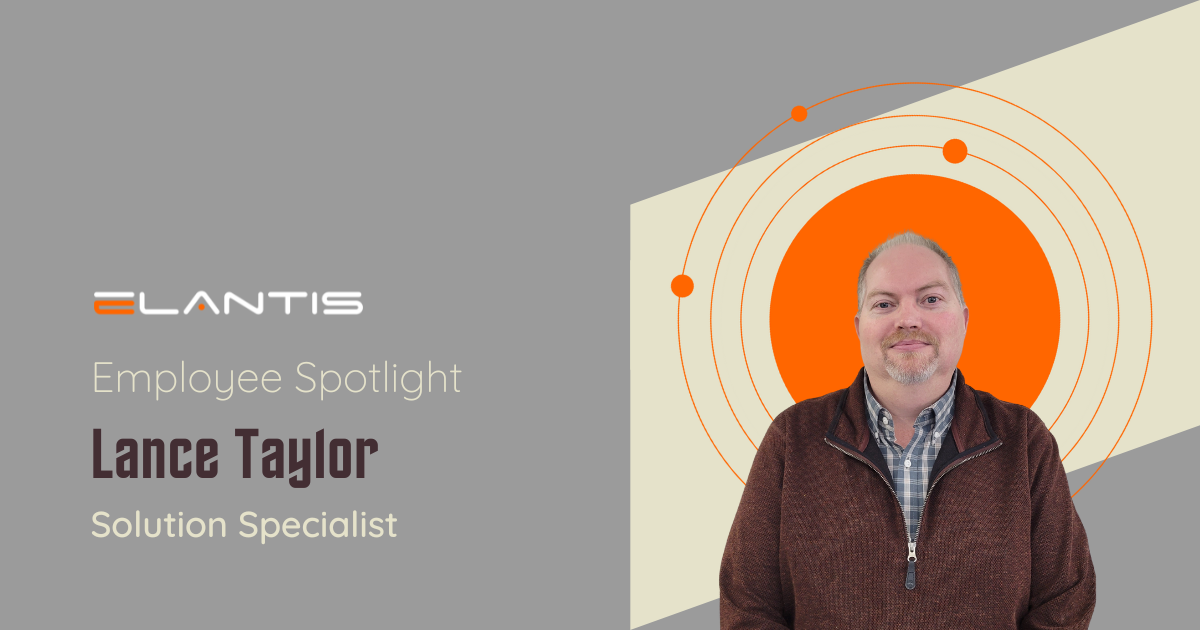 This month, we shine the spotlight on Lance Taylor, Solution Specialist at Elantis. Lance’s passion for technology started at a young age, when his computer skills shone in typing class and he eventually became a faculty assistant in high school. Lance later discovered his penchant for Microsoft SharePoint while doing migrations for a large grocery retailer. In this interview, Lance shares his outlook on how his role at Elantis brings a brand-new adventure every day, and how staying on top of changing technologies has been the key to professional growth.

Andrea Nwobosi: Welcome, Lance. This is your time in the spotlight! I’m so happy to have you here and to be able to have some time to get to know you a little bit better, to learn a little bit more about your career, and what you do here at Elantis.

Lance Taylor: Thanks, Andrea. I’ve been looking forward to this moment.

Andrea: Great! So how about we start with just that—what is your current role at Elantis and what do you do here?

Lance: Presently, I’m a Solution Specialist here at Elantis. I work on various projects, doing things from BA roles to coding to design analysis. I put on whatever hat I am given to get the job done.

Andrea: So, lots of variety in your role, I bet. What started you on this path? You’ve been in the IT industry for a few years, I imagine. How did it all start?

Lance: So, it all started in 2001 when I was working at Sobeys. There was a lunch and learn, where I got to spend half an hour when basically my boss said, “You wear that hat. You’re going to put the SharePoint hat on.” I went into the meeting, learned about SharePoint 2001 and then basically I became the expert there and helped them migrate from SharePoint 2001 to 2003. I built a number of systems. We upgraded later to 2007 and when Sobeys acquired Safeway, we amalgamated their SharePoint systems with ours as well as Thrifty Foods.

Andrea: How did you get from that role into what you’re doing today?

Lance: I helped Safeway migrate to Sobeys and used my experience there. Obviously, with the acquisitions, they needed to kind of downsize and do the re-merger thing. I went to a tech college to learn more about SharePoint because I knew that was my calling and took a course there. It’s about a year-long course and I graduated the course with 100%. I think I’m the only student there who actually graduated. At that time, Dave Roe (Elantis CEO) did a presentation there and was looking to recruit students. I had been trying to get into Elantis for about three years and here I am.

Andrea: Oh, that’s such a cool story! I did not know that was what brought you here. That’s fantastic.

Lance: This is the place to be if you want to do SharePoint.

Andrea: Yes, for sure. You mentioned that SharePoint is your calling. Getting 100% on that exam is obviously a testament to that.

Lance: Nobody can know it all and that’s the beauty of our team here. We have a number of team members who know certain areas of SharePoint better; we collaborate and get the job done.

Andrea: There seems to be a lot of variety in your role. What would you say is your favourite thing to do in your day-to-day?

Lance: I don’t want to say repeatability but having methodology. That’s kind of our strength in doing migrations, etc. We have a proven process that we implement and don’t stray too far from that path; that’s our recipe for success. I’m happy to contribute to that, to the projects that I work on, and to get that extra knowledge in the areas that I don’t know. Every new project is a brand-new adventure.

Andrea: Prior to your time with Sobeys, were you always in IT or did you have a different career prior to that?

Lance: I’m a child of the ‘80s so I grew up when computers first came out. I would say in Grade 7 I kind of found my calling and then of course when Grade 9 rolled around, I did guidance counseling, and you know it’s pretty sad when the guidance counselor has to ask you to set up the computer. Then when you take the test, they say that your vocation is computers, well [ha ha]. Ultimately, I ran a few bulletin board systems back in the day. So, I’ve always been kind of nerdy for computers. Actually, I managed a couple of local computer stores and sold some vintage Commadore hardware back in the day.

So, it’s always been my calling and when I got to high school, instructors put me to work as a faculty assistant. I walked in, did the typing course and my typing speed was up to 75 words a minute. Then when they took me to do it on electronic keyboards, it was kind of yeah, we know you know how to type. That’s kind of where it went.

Andrea: What would you say is the proudest moment of your career so far?

Lance: The highlight of my career was at Sobeys/Safeway when I was recognized for passion and integrity, and for putting the customer first. I love that about our motto. As you know, always putting yourself in the position of the client and giving a solution that you know you would use. I overheard a conversation from the gatehouse security people that they were using Excel spreadsheets to track vehicles coming in and out of the warehouse for grocery deliveries. Sometimes their process would take up to 15 minutes. After overhearing that, I built a system in SharePoint and I got it down to well under 2 minutes to get the truckers in and out. So that was a big win for them. I know that system was used heavily, plus systems I implemented there were tied directly to retail. A lot of the projects that I’m working on now are kind of similar but more tailored for other industries. So, you take what you know and you apply it where it’s needed. I’m all about trying to get it done in one click or two clicks for the user, you know, put yourself in their shoes for how they’re going to use the end product.

Andrea: It sounds like connection with our core values is something that guides your work to make sure it’s the best solution for the customer. That’s fantastic.

What would you say you wake up most looking forward to every day here?

Lance: Every day is a brand-new adventure. You think you’re going do one thing, but you’re probably going to do some other things in between. So, it’s never, never boring. You are always challenged, and I like being challenged.

Lance: As a consultant they say, how do you get that thing done in 30 minutes? It’s because you’ve got 30 years of experience. When the new people come in eager to always lend a hand and you get to hand off skills and knowledge and the stories. Tribal knowledge is important.

Andrea: What was a challenge that you faced through your career and how did you overcome that challenge?

Lance: Not knowing the thing. Not knowing the thing can be your enemy. So, sitting down and putting your nose to the grindstone, learning how something works, you know, any new technology. It’s always changing and evolving, so trying to keep abreast of that is always key.

Andrea: How do you stay on top of everything that’s changing? What are your go-to resources?

Lance: SharePoint Thursdays is pretty much a standard in the industry. Where you sit down and watch a bunch of YouTube videos and Power Apps. Keep abreast of the latest conference news that are coming out from SharePoint conferences, etc.

Andrea: It’s great that you’ve made it into a weekly routine and that learning is part of your schedule.

Andrea: You’ve been in this game for a while now. What would be your top piece of advice to someone who’s just starting out in IT?

Lance: Pick up a piece of technology that you like, that you’re passionate about. So, for me it was SharePoint. I mean, maybe you’re into Figma, you’re into design. You want to do prototyping or Power Apps. I mean, there are so many things in SharePoint you can be doing: PowerApps, Forms, even Nintex workflows and it’s all relatable. I’ve worked with a lot of people in the tech college that had no prior IT experience. But again, understanding the fundamentals: you know how computers work, input, processing, outputs, and CRUD operations. Master these things and you’ll be successful in any project you do. Plus, understanding user requirements.

Andrea: Great advice. I’ve got one more fun question for you: who is your modern-day hero?

Lance: Ah, that’s pretty simple. Jim Lovell would be my hero from Apollo 13 and Gemini. I mean, he’s traveled to the moon twice. He never gave up even though he didn’t make it. You know, my philosophy is all things are possible with enough time, code, money, and/or beer. And failure is not an option. So that comes from Gene Kranz and directly from Apollo 13—one of my favourite missions. I actually got a chance to e-mail Jim Lovell once and send my appreciation at the time he was orbiting around the moon. My brother was born on that Christmas Eve, so I relayed that story to him and he replied. You know, it’s always amazing how the stories inspire, but you know they always say never meet your heroes. But I got to say I work with a few here at Elantis that I consider mentors and I enjoy learning from them.

Andrea: What is next for you in your career? Where is this path going to take you?

Lance: It’s interesting. I don’t have a five-year plan; a fellow should, I would say. I’m at that age where it’s time to instill the knowledge that I know in other people and pass on what I learned. So, continuing to work together in a team environment is definitely in my future, I think. 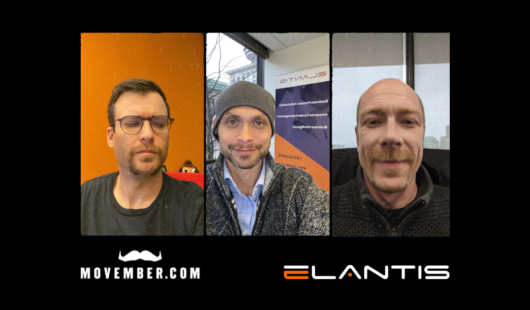 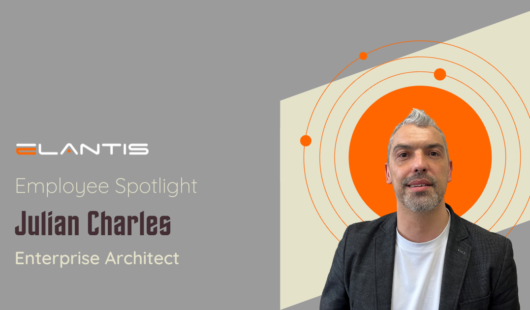 IT Career Paths at Elantis – Employee Spotlight with Julian Charles

In this interview, Julian shares how his passion for technology as a young child led him to the strategic role he has today. For this aspiring professional footballer, a career in IT was his plan B—but after 20+ years, it has become a challenging and fulfilling journey. 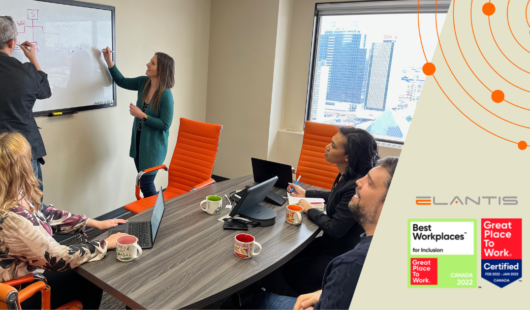 Elantis recognized as a 2022 Best Workplace™ for Inclusion

We are proud to announce that Elantis has been named on the 2022 list of Best Workplaces™ for Inclusion. Elantis received this honour after a thorough and independent analysis conducted by Great Place to Work®.